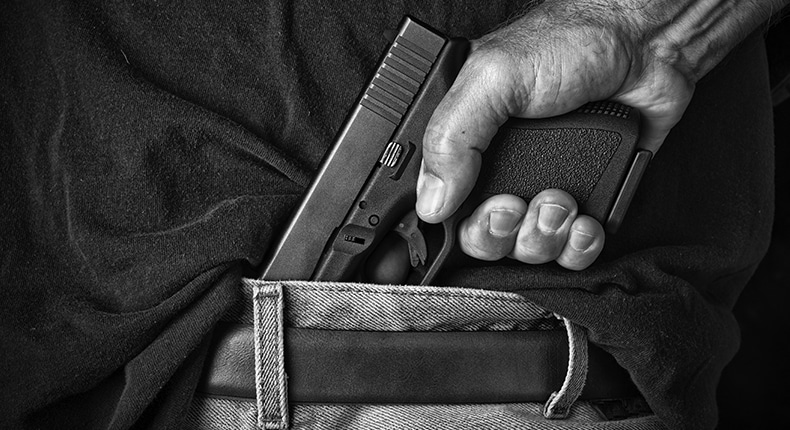 Vigorous defense against firearms and weapons charges in Columbia and Charleston

Facing weapons charges in South Carolina is a serious issue, leading not only to serious penalties like jail time, but also resulting in loss of your gun rights. As you know, the Second Amendment guarantees us the right to bear arms. However, that right is not absolute, according to certain restrictions at the federal, state, and even local level. And, a conviction for a weapons charge can subject you to penalties like restrictions on gun ownership as well as a criminal record.

Our team understands that the vast majority of gun owners are lawful and responsible. If you’re charged with illegal possession or use of a firearm, however, you may be facing severe penalties and jail time. At The Law Offices of A. Randolph Hough, P.A., we provide strong defense for clients accused of a variety of weapons-related offenses at the state and federal level. Contact us today to schedule a consultation with a criminal defense lawyer who wants to help.

Our firm handles a variety of weapons and firearms charges in the Charleston and Columbia area, including:

Even if you believe the charges against you are minor, you should always seek the advice of an experienced criminal defense lawyer to ensure your criminal record remains clean and you don’t lose your constitutional rights.

Many individuals find themselves facing weapons or firearms charges simply because they were unaware of the specifics of the law. Every state has the discretion to design its own gun laws, and everyone can agree that the priority of these laws is safety. The Constitution protects the right to own certain types of firearms, but some types of weapons are illegal under state law. These include:

Residents of SC are also subject to federal rules and regulations regarding gun ownership, including the Brady Handgun Violence Prevention Act and the National Firearms Act.

With all of these different laws and regulations, it’s not surprising if you’re confused about your arrest or the charges against you. We can help you unravel the legal red tape and restore your constitutional rights. Following are some of the questions our clients typically ask regarding weapons and firearms charges. If you have any other concerns, please feel free to contact Attorney Hough.

What is a misdemeanor gun crime?

The most common arrest and gun crime charge in the Columbia area is unlawful carrying of a handgun. Even if you have legal possession of a handgun, you can still be arrested for unlawful carry, as the prosecution merely has to prove that you had the weapon “about your person” – meaning that it was accessible and convenient for immediate use. This could mean in your coat pocket or next to you on the seat of your car.

What is a felony gun crime?

A felony gun crime charge is a more serious offense than unlawful carrying. You can be arrested for a felony charge even if you had the gun stored in a lawful place. However, the prosecution has to prove a number of facts to convict an individual of various felony weapons charges, for example, possession of a handgun that was stolen or the serial numbers have been obliterated. It’s also illegal, according to state law, for any of the following individuals to have possession of a gun:

Convictions for both misdemeanor and felony gun crimes can result in several years in prison as well as confiscation of your weapon(s).

Am I allowed to carry a gun in my vehicle?

If you have a concealed weapons permit (CWP), it should be lawful for you to carry your weapon under the seat or in an unclosed container in your vehicle.

I am in the military and was arrested for a gun offense. Can you help?

At The Law Offices of A. Randolph Hough, P.A., we have the utmost respect for the people who serve our country as members of the armed forces. In fact, Attorney Hough is a graduate of the Citadel and has personal understanding of the code of honor that guides service members throughout their lives and careers. That’s why if you’re accused of committing a crime, especially a gun offense, it can put your entire future in jeopardy.

A weapons or firearms conviction will almost always result in a loss of your military career. A guilty verdict in these types of cases can result in military penalties under the Uniform Code of Military Justice as well.

If you’re accused of illegal gun possession or any other weapons-related charge, you may be facing a variety of penalties, all of which can have a negative impact on your future. Depending on the circumstances and the severity of the charges, a weapons conviction can result in up to 10 years in prison or more. If an individual uses a firearm while committing another crime, a conviction could result in decades or even life in prison.

Attorney Hough puts his experience with, and knowledge of, local courts and authorities to work for you, strategizing a defense to avoid these serious penalties and keep your criminal record clean.

A firearms and weapons conviction not only leaves you with a permanent criminal record, it can also result in confiscation of your guns. At The Law Offices of A. Randolph Hough, P.A., we stand by our clients and defend their constitutional rights. Come to us for strategic and experienced representation. To schedule a free consultation at one of our offices in Columbia or Charleston, please call 803-771-4119 or fill out our contact form.